The community effort that delivered Dapr v1.0 by Ori Zohar and Yaron Schneider
Wednesday February 24th, 2021 at 1:29 AM

It has been an incredible journey bringing Dapr from its initial release in October 2019 to production readiness and it could not have been made possible without a passionate, open community of developers from around the world. This is the benefit of open sourcethe hundreds of contributors to Dapr prove that many hands make for light work. Having many developers use Dapr, building applications in different languages and in a wide spectrum of scenarios ensures that Dapr is used and tested thoroughly. This was an important part of delivering Dapr v1.0 and will remain important as Dapr moves forward.

Since the initial announcement of Dapr, we've seen a rapid, steady growth of developers contributing to the project in all areas, and today we have 700 individual contributors to the project. This includes developers from cloud vendors such as Alibaba Cloud, large companies such as HashiCorp, as well as enterprises such as ZEISS who is building business critical systems with Dapr in production. Additionally, smaller startups such as Roadwork have made contributions while using Dapr to gain portability for their cloud native solution and accelerate its development for more agility.

A great example of this kind of contribution is the recent addition of the Dapr PHP SDK. This SDK was contributed by a developer from Automattic who is both passionate about PHP and excited about the possibilities Dapr holds. Contributions go beyond code and come in the form of docs, samples, issues, and guidance to Dapr users like the one provided by New Relic on how Dapr observability can be used with their monitoring tools.

As illustrated above, contributors have been making an impact in all corners of the Dapr project. Noticeably, the areas that have seen contributions from the greatest number of community members are the core areas of Daprthe Dapr runtime, which includes the code of the Dapr sidecar, the docs, and the components-contrib, the repository holding the code for components.

Having many contributors build new components is especially valuable, as components offer Dapr users the ability to leverage the Dapr API and interface with a wide range of technologies and systems. Having a large number of components available means helping even more developers simplify and accelerate the process of writing distributed applications. More components also means more flexibility in where these applications can be deployed, making code even more portable in multi-cloud or hybrid scenarios.

Today Dapr offers over 70 different components for state management (such as Redis, MySQL, Azure Cosmos DB, and many more), Pub/Sub messaging (such as RabbitMQ, AWS SNS/SQS, Kafka and more), secret stores (such as Kubernetes secret store, Azure Key Vault, HahiCorp Vault, and more) and both input and output bindings to integrate with services such as SendGrid, Azure Events Hub, and more.

Building an inclusive, open community has always been a high priority for the Dapr project. Last September, we shared the open governance model Dapr follows. We are committed to keeping Dapr vendor-neutral and welcoming to all developers and community members. To this end, we have begun evaluating open-source software foundations for Dapr's home in the future.

We invite you to try Dapr yourself and join the community. We believe that Dapr can help you build distributed applications more easily and we are always looking for more developers to provide feedback, open issues, and help us define the future of Dapr.

From today's "This Week in Programming" column: Rejoice, long at last, all you Gophers, for the question of whether or not the Go programming language will adopt generics has finally, after many years of debate, been answered this week with the acceptance of a proposal made last month. In this most recent proposal, Golang team member Ian Lance Taylor writes that generics have been "one of the most commonly requested language features" since the language was first released in 2009, but even then, it's adoption doesn't come without concerns. Taylor explains the idea of generics in the intro of his proposal: "Generics can give us powerful building blocks that let us share code and build programs more easily. Generic programming means writing functions and data structures where some types are left to be specified later. For example, you can write a function that operates on a slice of some arbitrary data type, where the actual data type is only specified when the function is called. Or, you can define a data structure that stores values of any type, where the actual type to be stored is specified when you create an instance of the data structure." It is precisely this value proposition — being able to write reusable code — that excites some developers and has been behind the push all along... Generics wasn't the only controversial programming language addition this week, with the Python Steering Council making the decision to accept a number of Python Enhancement Proposals (PEPs) collectively known as the Pattern Matching PEPs. "We acknowledge that Pattern Matching is an extensive change to Python and that reaching consensus across the entire community is close to impossible," the council writes, saying that, nonetheless, they "are confident that Pattern Matching as specified in PEP 634, et al, will be a great addition to the Python language." One dissenter to the addition found their way to the pages of iProgrammer, with the snarky headline "Python Adopts Pattern Matching — Kitchen Sink Next." In other news, Google increased its support for the Python Software Foundation with a donation of more than $350,000 to support three specific projects, and also says it will continue its donation of Google Cloud infrastructure to the foundation.

Read more of this story at Slashdot.

How many ways can you run containers on Azure? Carl and Richard talk to Tom Kerkhove about his experiences working with Azure container solutions. The conversation starts out talking about Azure Functions, which under-the-hood are handled in containers - but you don't control those containers at all. You can run Web Apps in Containers or use the Azure Containers Instance. Azure Service Mesh also supports containers, and then there is the Azure Kubernetes Service. Tom helps sort these various options out - they each can help you in different ways!

mrobold
reply
I am amused that I finally got around to listening to this, hearing Tom suggest there was not enough investment in Service Fabric Mesh, and the very next day Microsoft announced the end of Service Fabric Mesh
Orange County, California

California's Inmate Firefighters May Soon Be Allowed To Continue Their Careers After Release by Scott Shackford
Thursday September 3rd, 2020 at 1:52 AM 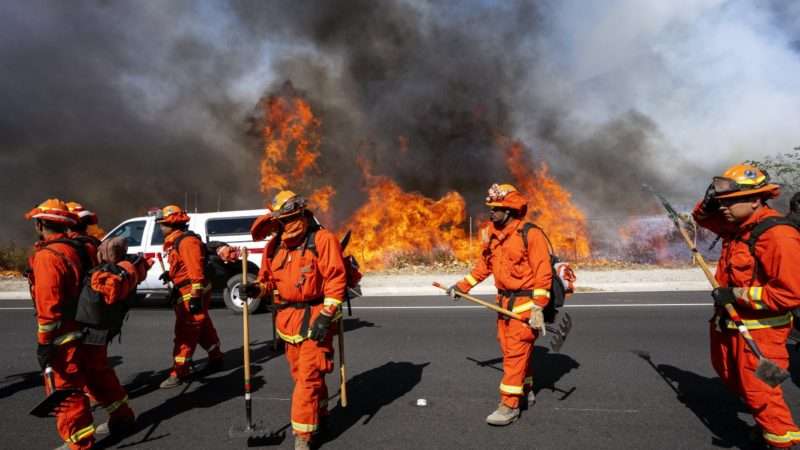 A summer heat wave led to another round of wildfires in California which drew attention to the state's dependence on prison inmates as firefighters and the terrible fact that licensing regulations stop these men and women from continuing this work after they're freed.

But that may change with A.B. 2147, which lawmakers just passed on August 30 and now awaits Gov. Gavin Newsom's signature. The bill, sponsored by Assemblymember Eloise Gomez Reyes (D–San Bernardino), creates a process for former inmates to get their records expunged when they're released so that they can qualify for a state license to fight fires professionally.

Currently, California's oppressive licensing laws prevent former inmates from being able to earn the proper emergency technician license because they have criminal records. But every summer, when the wildfires grow out of control, the state depends on current inmates (who earn $1 per hour) to assist firefighting crews. Over the past couple of years, there's been more and more media attention paid to the outrage that these people cannot pursue firefighting as a career after they're released.

In June, Reyes introduced A.B. 2147 to fix this problem. Her bill establishes a process of relief for inmates who have participated in one of these "hand crews" successfully (meaning they didn't get booted out of the program for misconduct). Inmates convicted of certain crimes (like murder, kidnapping, rape, sex offenses, and, of course, arson) are not eligible.

"If we are willing to allow an incarcerated person to volunteer and help fight fires—protecting lives and property while putting their lives at risk; then we should be willing to allow those same individuals an opportunity to receive an expungement which can be granted after judicial review," she wrote in June after introducing the bill.

The bill doesn't stop with just letting former convicts legally fight fires. There are more than 40 occupations in California where people with criminal records are shut out of occupational licenses. A.B. 2147 will allow these former prisoners to work on getting licenses in these other careers, though they'll still be blocked from working as teachers, police officers, or elected officials.

Firefighters unions had been resisting this push to let inmates become professionals after they're released, but according to Erika D. Smith, a columnist at the Los Angeles Times, Reyes managed to satisfy them with this bill. It passed unanimously through the state's Senate and 51-12 in the Assembly.

Now it's up to Newsom to decide whether to sign the bill. He absolutely should, of course, allow these people to return to the workforce after their release. 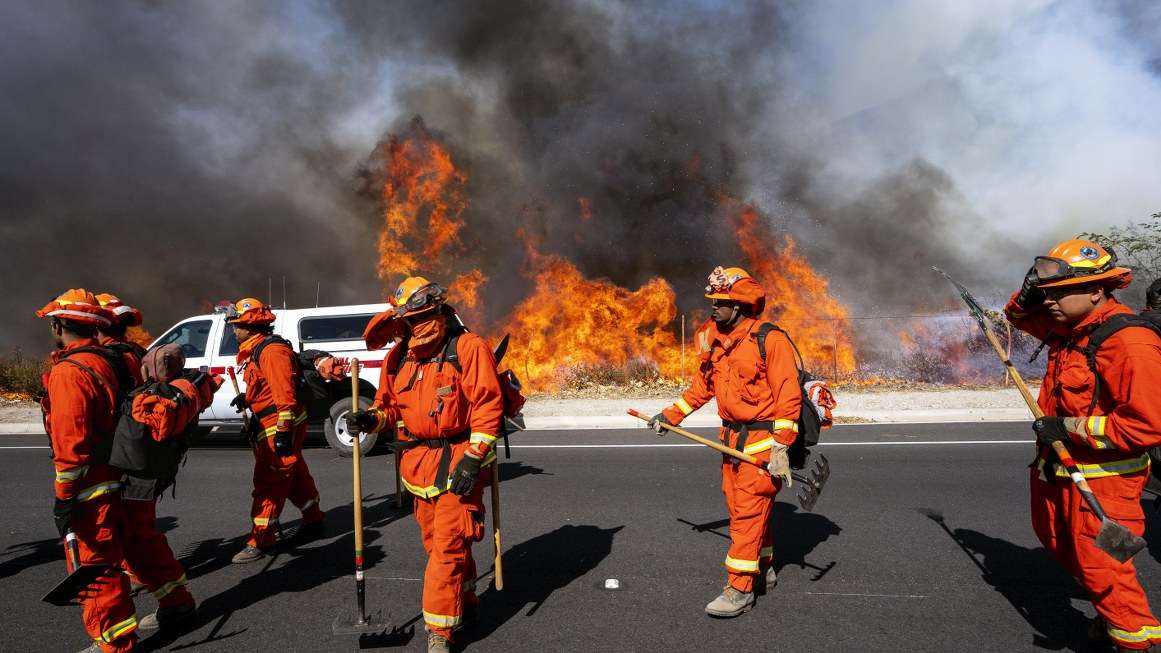 Suppose that in early February a crystal ball told you that the US economy was about to be locked down for a month to prevent a big outbreak of Covid-19. That time would be used to implement an aggressive policy of test/trace/isolate plus widespread mask wearing. With just a few dozen cases, it would be possible to isolate all the infected, as in places like New Zealand. You might think the one month lockdown was good news.

Now suppose instead that your crystal ball suggested that there would be a 5-year lockdown. Now your reaction might be fear. “Wow, that would only happen if the epidemic really got out of control.”

Now let’s switch to monetary policy. Suppose the Covid epidemic causes the Fed to temporarily slash rates to zero. You might think this was good news, monetary stimulus to offset the decline in nominal spending.

Now suppose instead that you saw this Bloomberg headline:

The new approach could be unveiled as soon as next month.

How do you react? I worry that this means the economy is likely to be very weak for the next 5 years—not at all what I hoped for.

Now suppose you have been calling for level targeting and the Fed instead opts for “average inflation targeting”. Also assume the market reacts to the Fed’s announcement with market inflation forecasts of well below 2% for as far as the eye can see. Does that make you optimistic?

I do think that average inflation targeting would be a tiny step forward. But it’s also far more discretionary than level targeting, and hence it depends much more on implementation. Unlike with price level targeting, we don’t know how it will work.

Charter can charge Netflix and other online video streaming services for network interconnection despite a merger condition prohibiting the practice, a federal appeals court ruled today.

The ruling by the US Court of Appeals for the District of Columbia Circuit overturns two merger conditions that the Obama administration imposed on Charter when it bought Time Warner Cable and Bright House Networks in 2016. The FCC under Chairman Ajit Pai did not defend the merits of the merger conditions in court, paving the way for today's ruling. The case was decided in a 2-1 vote by a panel of three DC Circuit judges.

The lawsuit against the FCC seeking to overturn Charter merger conditions was filed by the Competitive Enterprise Institute (CEI), a free-market think tank, and four Charter users who claim they were harmed by the conditions. The FCC unsuccessfully challenged the suing parties' standing to sue, and it did not mount a legal defense of the conditions themselves.